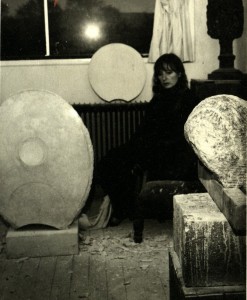 Gerda Frömel worked in a wide range of media and displayed talent and proficiency with both modelling and carving. Her bronze works often displayed great subtlety and fluidity, with molten shapes, barely incised lines, and motifs scratched into the surface of the wax original, whereas her stone pieces were bolder and dealt more with mass and form.

At the beginning of her career, Frömel employed both sand cast and lost-wax cast techniques when creating her sculptures, the sand casting process producing a textured finish and the lost wax process resulting in intricate shapes and finer details. The textured, unpolished finish became a distinctive quality of Frömel’s work. Her sculpture Portrait of Johann Jacob Weneslaus has an uneven surface, as Frömel did not work the surface of the bronze to a fine and even polish, but left the signs and marks of her modelling clearly on the piece. Moreover, she did not clean away the remnants of the plaster left over from the casting process; the residue, known as investment, would normally be blasted out from the cracks in the bronze before it is patinated, but instead, Frömel chose to leave the investment in place.

The white investment on Portrait of Johann Jacob Weneslaus (1957), with the child wrapped in his hat and coat, suggests the idea of playing in the snow, while the investment left in place on Frömel’s Sheep (1958) suggests the wool of the animal. Even later pieces, such as Frömel’s marble Heads from her 1970 solo exhibition, resemble her earlier bronzes, with the distinctive investment visible. This variation in surface was a characteristic of Frömel’s work in metal and stone; works that appeared highly finished from a distance, on closer inspection revealed machining marks and chips.

Later in her career, when she began to produce carved stone sculptures, it was clear that materiality was important to Frömel. She employed numerous stone types: Carrara marble, Portuguese Rose Aurora marble, Connemara marble, granite, slate and alabaster, the latter being the softest to carve. Additionally, Frömel gave careful attention to the surface treatment of her sculptures. She hand-finished many of her pieces with pumice powder and emery paper, forgoing use of the cumbersome power tools available to her at the time.

In some cases, Frömel deliberately left some roughness or imperfection in her work; the bronze plinth of Black Hearts, for example, still displays some of the spin-off marks left by the polishing disc, which must be intentional as Frömel had polished such marks out completely in other instances. In other cases, she laboured intensively to achieve a certain finish; a piece like Rosa Aurora would have taken many weeks to carve and then several more to achieve the highly polished surface.

As her technique and style reveal, Frömel’s sculptures were always exquisitely made and her attention to detail, whether it was in the mechanical design or the surface detail, elevated them beyond the everyday.