We are delighted to present Patrick Hennessy De Profundis, the first survey of this complex artist’s work since 1981. The exhibition forms part of the IMMA Modern Irish Masters Series, a strand of programming that looks at the post-war period to shed light on artists who have been critically neglected; but also to reflect on what their work might mean to an audience today. 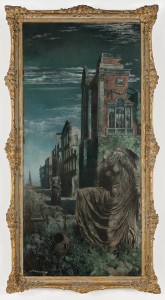 ‘A strange and exotic presence in Irish art’, ‘standing alone’, ‘very un-Irish’, Patrick Hennessy RHA (1915-80), was one of Ireland’s most successful post –war realist painters, but one whose work puzzled the critics writing in Dublin in the 60s and 70s. A prolific artist, he created traditional portraits, landscapes, equine studies and still-lifes, but he also created works unlike anything being made in Ireland at the time. Fusing realism with a Surrealist subjectivity learned in Paris he painted human figures isolated in the landscape, male nudes and portraits of handsome African men that puzzled Irish critics who branded him ‘something of an outsider’.

The label ‘Surrealist’ was generally used to explain-away some of his images that were not easily read. In reality many of his works were comprised of visual codes that signified clear narratives of homosexual life. While these codes were impenetrable to some; they were readily interpreted by those around his circle that included artists like Francis Bacon, the Two Roberts (Colquhoun & MacBryde), John Craxton and Lucian Freud; as well as the writers Elizabeth Bowen, Cyril Connolly, Brendan Behan and others.

At a time when gay people were subject to social and legal persecution for the simple fact of their sexual orientation, Hennessy and his lifelong partner Henry Robertson-Craig bravely chose to exhibit works that clearly marked them as homosexual. They have almost no peers in Irish art, but Hennessy’s late work demonstrates an engagement with the newly-emerging international queer-art movement of the 1970s.

In 2015 Ireland embraced equality in the Marriage Referendum becoming the first country in the world to do so by popular vote. On the centenary of the Easter Rising IMMA celebrates those radical thinkers and activists who paved the way for courageous social change. We consider their legacy and reflect on what work remains to be done to fulfil their visions of an equal and plural society. 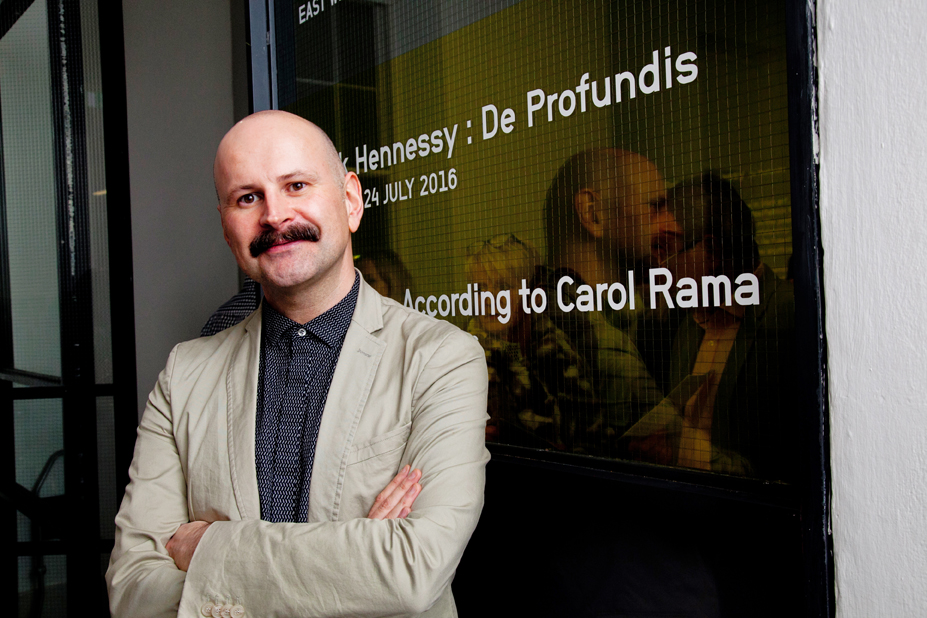 I ruined myself. Tired of being on the heights I deliberately went to the depths in search of new sensation. When first I was put in prison some people advised me to try and forget who I was. It was ruinous advice. It is only by revealing what I am that I found comfort of any kind.

In late 1939 a young painting graduate returned to Ireland following his education in Scotland and on the Continent. Less than five months later his first solo exhibition in Dublin was opened by the doyenne of Irish Modernism, Mainie Jellett. The show included portraits of figures such as the German Ambassador and his family, and Madame Jammett of the famous restaurant. This artist was Patrick Hennessy.
One of the fascinating questions about Hennessy is how did he immediately identify those who mattered and then successfully cultivate them, as by the late forties the list of his patrons and portrait sitters is a roll-call of the aristocracy, bourgeoisie and cultural figures alike. In his favour he was a very talented painter who had excelled at the Dundee School of Art; he was funny, good-looking and charming when he wanted to be. On the other hand he was gay and lived openly with his life-long partner Henry Robertson Craig at a time when this was both unusual and illegal. Hennessy’s homosexuality coloured his life and work. In his personal life it caused him to shun large gatherings, perhaps for fear of being snubbed, but it also created a rich seam of imagery for him to explore in terms of the male figure and the darker spaces created by repressed feelings and emotions. The exhibition at IMMA is not a retrospective of his entire oeuvre but a look at the more personal aspects of his practice highlighting how unique it was in mid-20th century Ireland.

The 1940s were hard for all and hungry times for artists. Hennessy showed regularly with the Dublin Painters Society and survived mainly through the sale of still-lifes, flower paintings and portrait commissions. These would be his bread-and-butter throughout his career becoming more accomplished in the 60s and 70s when they became acts of virtuoso painting. But alongside these he created a number of startling images which set him apart in the history of Irish art.

The title of the exhibition, De Profundis is derived from an eponymous work exhibited by Hennessy in 1945. The use of this title in itself is extraordinary. It refers to Psalm 130 when Christ cried out to God the Father, ‘From the depths I cry to thee O Lord’, but more notoriously it is the title of the last work of prose written by Oscar Wilde before his death in 1900 and addressed to Lord Alfred Douglas. It was highly unusual for an Irish (or British) artist or writer to quote Wilde in a positive way. Wilde was associated with the shame that ‘dare not speak its name’ and most Irish writers distanced themselves from him at this time. Hennessy made this declaration in a public fashion, exhibiting the work at the Royal Hibernian Academy and frequently afterwards. In a way it was an invitation for the critics and public to read the theme of homosexuality or male identity in his work but this was an invitation that, aside from some snide asides, was soundly declined. Hennessy was not alone addressing these themes. Gerard Dillon and Basil Rákóczi both exhibited works that dealt with male experience, and their work forms a point of comparison in the texts that follow. Many of Hennessy’s works show men or adolescents isolated from their peers, seeming to look to nature for answers. Coming from the artist who made De Profundis one can read these images as men grappling with the problems of their sexual identity and the anxiety and loneliness they are experiencing.

The late 50s brought some major changes in Hennessy’s life. He had suffered from pulmonary infections throughout his life, but following three bouts of pneumonia his doctor advised him that another winter in Ireland would kill him. By now he had achieved a level of financial security. He had left the Dublin Painters behind, had presented a number of shows at the Hendriks Gallery and had sold well at Agnews in London so he and Robertson Craig had the funds to travel. They settled on spending time in Morocco, specifically Tangier which had drawn artists and writers in the post-war years due to its International Zone status; and they returned every year until finally settling there permanently around 1970.

North Africa affected Hennessy’s work in substantial ways. Immediately the sunshine caused his palette to change, becoming lighter and clearer. He travelled along the coast to Essaouira, Fez and the Roman ruins at Volubilis and Lixus. At times he created works that are a direct record of the land and cityscapes, but the most striking works are those which insert the human narrative into these places. Artists like Aloysius O’Kelly and Sir John Lavery had spent time in North Africa and the images they created were Orientalist, depicting the people and places they saw as other and foreign. Hennessy departed from this convention. He did not orientalise the people he met; neither did he create images of the souks or mosques. His models always wear contemporary dress and usually they are named, demonstrating his wish to portray an individual and not a type. The space away from Ireland and the large community of creative gay men found in Tangier encouraged Hennessy to paint images that were more overtly sexual. When shown in Dublin they puzzled the critics. Writing in the mid-seventies Bruce Arnold found some of Hennessy’s African works actively distasteful, saying that his exhibition at the Hendriks Gallery, ‘was full of rather stupid pictures of  young men standing around on beaches in their underpants’. Others who understood the references contained in the pictures sometimes chose to use it against the artist. In the catalogue for ROSC ’71 Dorothy Walker wrote a particularly personal and nasty entry comparing his virtuosity with that of the pianist Liberace saying that ‘he was unsurpassed at painting satin ribbons ’. Clearly his realism was not to her taste and she could not see past the style to a subject matter that was novel and extraordinary. Brian Fallon writing in 1968 was somewhat more observant saying

‘in Irish art he is a strange outsider, close in style perhaps to the RHA painters, but a thousand miles away from them in mentality. He has, at its best, a shiveringly modern outlook; perhaps his nearest parallel would be the equally outré American, Andrew Wyeth. Both have the same, almost obsessively detailed technique and the same ability to suggest a sinister essence in everyday things.’

Despite often receiving very positive reviews of his work in the press, Hennessy said he had never had a ‘good’ review of his work – perhaps meaning that critics never addressed its content. Similarly he never used the word ‘Surreal’ to describe his work, instead allowing ‘imaginative realism’ or ‘dynamic realism’, but then he was not given to explaining his images. Branding Hennessy’s work as ‘Surreal’ offered critics a way to avoid describing what they were seeing. The surreal was easier to deal with than the sexual, particularly when presented by a homosexual man. Painting in the shadow of the Labouchère Act that was used to convict Oscar Wilde, Patrick Hennessy’s representation of the lives of gay men places him within a small group of avant-garde artists like the American Paul Cadmus or Bloomsbury artist Duncan Grant; but they have few peers, aside from writers like Kate O’Brien and Brendan Behan who had books banned for references to homosexuality. Hennessy lived to see the emergence of a modern gay rights movement and in parallel that of queer art; his late work demonstrates a direct engagement with that movement, making him the first Irish artist to do so.

I am personally indebted to the numerous collectors, colleagues, scholars and friends who have assisted me in gathering together this body of work. In particular, the writings of Fionna Barber, Riann Coulter, Roy Foster, Matt Houlbrook, S.B. Kennedy, Éimear O’Connor and Eibhear Walsh, have given invaluable context to this project.