Though undoubtedly an artist with her own unique style and sensibility, Gerda Frömel found inspiration for her work in a variety of places. Art critic Brian Fallon proposed that Frömel’s likeliest influences were Alberto Giacometti, Constantin Brâncuși, and Barbara Hepworth, commenting that ‘she [Frömel] took all influences in her stride, digesting them slowly and thoughtfully until they were completely her own.’

While the following three artists do not comprise an exhaustive list of Frömel’s influences, they offer the broadest overview of the creative environment in which Frömel worked. Learn more by clicking on one of the links below:

Barbara Hepworth (1903 – 1975), an English artist and sculptor, was one of the most celebrated Modernists of her generation and Frömel would certainly have been aware of her work through various art periodicals, catalogues and books. Frömel and Hepworth shared certain biographic affinities (both were mothers who faced the loss of a child, and the breakup of a marriage), as well as similar aesthetic and sculpting sensibilities.

Hepworth and Frömel both practiced direct carving, often recreating the same idea or theme in a variety of different materials. Frömel’s strongest connection to Hepworth can be seen in her series of discs from the 1967 Dawson Gallery exhibition, which bear stylistic resemblance to Hepworth’s Discs in Echelon. Moreover, both artists experimented with the affect of light on stone (most especially marble) and may have been influenced by pre-historic standing stones found in Ireland and England. 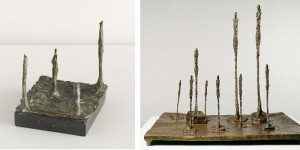 A Swiss sculptor, painter, draughtsman and printmaker, Alberto Giacometti (1901 – 1966) was part of the post-war Existentialism movement, which pushed back against the dominant trend of abstraction in art at the time, and instead asserted art’s relationship to the natural world and lived experiences. Newspaper clippings in Frömel’s archive show she was actively seeking out information about Giacometti’s work and likely spent time researching him at Trinity College Library.

Echoes and quotations of Giacometti are most readily evident in Frömel’s bronze figurative and animal sculptures from the early 1960s, but as Brian Fallon stressed, ‘she always digested her influences ‘until they were completely her own,’ and never strayed close to imitation.’ Giacometti was as well-regarded for his drawings as for his sculptures, a connection Frömel shared. In her first solo exhibition in 1964, Frömel chose to give equal status to her drawings, resulting in a careful reconsideration of the variety and depth of her work. 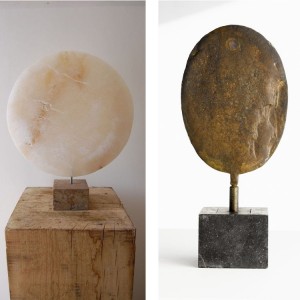 Romanian sculptor Constantin Brâncuși (1876 – 1957) is widely considered a pioneer of Modernism and is sometimes referred to as the ‘patriarch of modern sculpture.’ It is from Brâncuși that Frömel likely derived the use of plinths (bases or platforms) in her sculptures during the 1950s and 1960s. Many of Frömel’s plinths were made of marble, often with colours and textures that evoked nature, and directly bucked the current trends in minimalism.

A deeper connection between Brâncuși and Frömel, however, can be found in Frömel’s marble heads from the late 1960s. There are obvious similarities between Frömel’s work and Brâncuși’s Sleeping Muse I, as both artists created a series of sculptures of children’s heads, childhood being a common theme among Modernists in the first half of the 20th century. Both Brâncuși and Frömel placed an emphasis on sculptures that celebrated and retained a connection to the real world. Brâncuși in particular rejected the idea of his work as abstract: ‘There are idiots who define my work as abstract; yet what they call abstract is what is most realistic. What is real is not the appearance, but the idea, the essence of things.‘