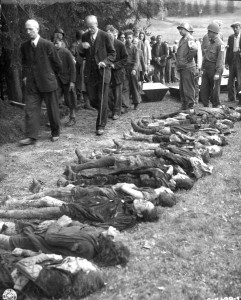 1945: German civilians were forced to walk past the bodies of Jewish women starved to death by German SS troops in a 500-kilometre march across Czechoslovakia.

Gerda Frömel’s artistic career was informed by her experiences: the trauma of the Second World War, enduring forced migration, economic hardship and the loss of her childhood home. Between 1944 and 1950, an estimated twelve million ethnic Germans were expelled from their homes in central and eastern Europe, Frömel’s family among them. Millions more lost their lives. The Frömel family was often in grave danger as they attempted to cross the German border before making their way to Austria, and finally, Stuttgart, in 1946.

These events aligned Frömel with a group of fellow Germans whose work emerged from, and was informed by, their experiences in a newly-divided Germany. These include Joseph Beuys (1921-86), Frank Auerbach (b. 1931), Eva Hesse (1936-1970), and Georg Baselitz (b. 1938). Many artists working in post-war Germany often tried to come to terms with the country’s recent past, struggling with a sense of collective guilt, while also wrestling with the division of the country and of Berlin – the centre of cultural activity. These early traumas led Frömel to assert the need for her work to retain its relationship to the real. As a result, many of her pieces referenced the natural world – animals, plants, portraits: sculptures that focused on the lived experience of the stuff around her. Frömel’s works for her first Irish Exhibition of Living Art – Horse, Reiter and Little Figure – reflect her immediate surroundings at Woodtown, with its busy stables, abundant countryside and constant buzz of activity.

Though Frömel was, by all accounts, happy at Woodtown and in Ireland, life as an immigrant (especially a German immigrant in the post-war years) could mean experiencing harsh receptions at times. In 1963, the Arts Council awarded Frömel one of three scholarships in sculpture, which resulted in a spiteful and xenophobic newspaper article that referred to Frömel as an ‘alien’ who was taking awards away from deserving Irish artists. These prejudices were not confined to anonymous press clippings, either. The following year, the Arts Council informed Frömel that she would not be eligible for future scholarships because she had not been born in Ireland.

Despite these slights, Frömel remained outwardly generous, while internalising her feelings as a coping mechanism. Such a reaction was likely typical among those of her generation, and it was one she drew upon at other painful times in her life, such as when her two-year-old daughter Natasha drowned in 1959, and when her marriage broke down irretrievably by 1970. Both events informed her later work, most notably her series of Eves and the figure Ondine, a water spirit doomed to die if her loved one was unfaithful. Other works created later in her career, in the early 1970s, were made concurrently with the escalation of violence in Northern Ireland. The clippings of reviews for Frömel’s exhibitions reflect the violence and political upheaval in the tone of the newspapers’ commentary. As an artist whose work was based on observations of life, Frömel could not let such events go unmarked. Later works with titles such as Blade and Spear related to the real world with their evocations of weapons of war. 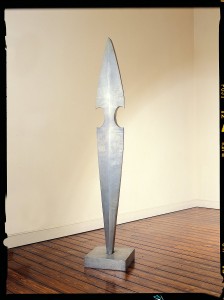 It is clear then, in tracing the progression of Frömel’s career, how she drew inspiration from her own life and surrounding environments, and how her work firmly places her within the post-war “return to order” tradition in art, in which the art is no longer abstract, but grounded in the need to reassert the primacy of the figure after years of witnessing its destruction.