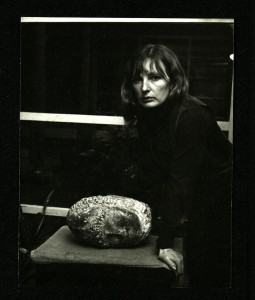 In November 1931, Gerda Frömel was born in the former Czechoslovakia to a German father and Austrian mother. She showed an early talent and preference for art, spending much of her time drawing, painting and making books and toys, though sadly none of these early pieces still exist. Although her childhood was mostly happy and uneventful, it took place against the backdrop of rising tensions leading to the Second World War and the complicated political status of the Sudentenland.

Gerda (second from right, standing) with her parents and sisters.

After surviving the war, Frömel and her family faced forced migration when the Czech government expelled the ethnic Germans from the country. With little more than a few belongings, Frömel, her parents, and her sisters attempted to cross into Germany, only to be stopped at the border. They eventually found shelter with family in Austria, before finally settling in Stuttgart, Germany in 1946.

In 1948, at age 17, Frömel enrolled in the Academy of Fine Arts, Stuttgart, before moving on to study metalwork and sculpture in Darmstadt, Germany and the Academy of Fine Arts in Munich. It was during her time at art school in Munich that Frömel met Werner Schürmann, a fellow sculptor, metalworker and bronze-caster. Frömel and Werner Schürmann were married in 1955, and moved to Ireland in 1956 when Schürmann accepted a job as a teacher at the National College of Art in Dublin. 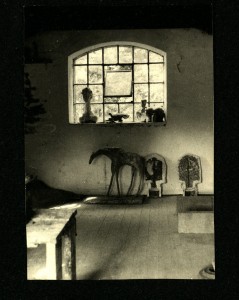 Frömel first exhibited in Ireland in the 1956 Irish Exhibition of Living Art (IELA), an association that would be sustained for nearly two decades. Following the first exhibition, Frömel steadily continued to produce new work and exhibit in various galleries, even when struck by tragedy. In 1959, Frömel’s second child, two-year-old Natasha, accidentally drowned while playing in a greenhouse. Natasha’s image remains in some of Frömel’s smaller works and her Ondine sculpture, a figure associated with water and tragedy. 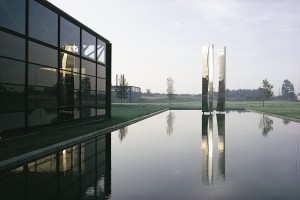 Sails, Frömel’s commission for the Carroll’s factory in Dundalk

In 1964, Frömel won her first solo exhibition at the Dawson Gallery, which was followed by two other key exhibitions at the gallery, one in 1967 with architect Michael Scott, and a second solo exhibition in 1970. Throughout her career, she received important recognition from the Irish art establishment, winning various prizes and commissions. Her most important commission came in 1967, when she produced the Sails sculpture for the Carroll’s factory in Dundalk, Co. Louth. At the time, it was the most ambitious public sculpture undertaken by an artist.

Frömel continued to develop her talents and skills, eventually creating larger-scale marble sculptures in the late 1960s and early 1970s. These pieces displayed her technique in carving (in addition to her previously established casting abilities), and appeared in several exhibitions and galleries in Dublin and throughout Ireland. Unfortunately, her exceptional career was cut short: in August 1975, while on holiday with her sons, Frömel died in a drowning accident at age 44, sadly echoing the fate of her young daughter. 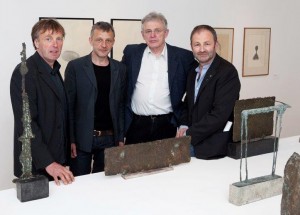 In 1976, the Goethe Institute and The Arts Council jointly hosted a substantial retrospective of Frömel’s work at the Municipal Gallery. Afterwords, however, her art remained largely disappeared from view and was mostly forgotten until now. Frömel was survived by her four sons – Wenzel, Moritz, Killian and Oliver Schürmann – who played a significant and important role in preserving and conserving her studio and archive after her death. Thanks to their work, IMMA has been able recreate Frömel’s nearly 20-year career and bring her work to a new generation of art enthusiasts.