After moving to Ireland in 1956, Frömel began exhibiting her work and continued to do so steadily until her death. Included here is a selection of her exhibitions and the various pieces associated with those shows. 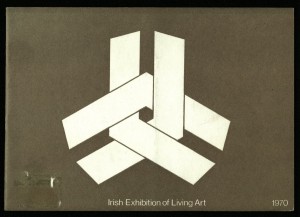 Cover of the Irish Exhibition of Living Art
(IELA) catalogue.

Frömel continued to participate in the IELA, Oireachtas and Rosc exhibitions in the early and mid-1970s. From 1972 onwards, the type of work she exhibited began to change, focusing more on large format sculptures in marble, with titles such as Blade and Spear. 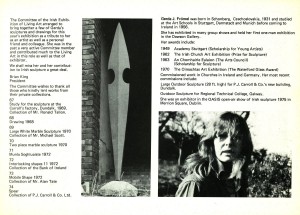 The catalogue from the IELA’s tribute to Frömel following her death.

After her death in 1975, the IELA made a special display of her work, and included a tribute to her in the catalogue. The following year, in 1976, the Goethe Institute and The Arts Council jointly hosted a retrospective of Frömel’s work at the Municipal Gallery.